You are here: Home › Asteroid Larger Than the Empire State Building in New York City to Fly by Earth on May 15

Asteroid 388945 (2008 TZ3) is projected to "dangerously" approach Earth in the next few hours but with an estimated safe passage on our planet's orbit this coming weekend. The massive asteroid has been compared to have a size larger than the Empire State Building in New York City. Fortunately, the space rock will not make a direct impact on our planet. According to the National Aeronautics and Space Administration (NASA), Asteroid 388945 (2008 TZ3) is part of its near-Earth objects (NEO) close approaches, with an estimated dangerous approach on Earth on the evening (US time) on Sunday, May 15. It currently travels in space at a speed of 23,300 miles per hour (37,400 kilometers per hour). Although the space rock will safely fly by on Earth, NASA considers it will still be a dangerous close approach in line with space terms, according to The New York Times, as cited by WION media outlet. This assessment is because it will have a relative distance with Earth's orbit within 2 million miles (3.

In comparison to Earth's natural satellite, the asteroid will still be farther than the moon, whose location from our planet is around 239,900 miles (384,000 kilometers). This is not the first time the rock will visit Earth. Its next reported approach will be in May 2024 with a distance of 6. The asteroid was first discovered in October 2008 and has an orbital period of 732 days (2 years). Also Read: Asteroid Impact: NASA Estimates Space Rock the Size of the Great Pyramid May Hit Earth on May 6 The passage of Asteroid 388945 (2008 TZ3) comes a week after the controversial Asteroid 2009 JF1 flew by Earth. The latter has the estimated size of the Great Pyramid of Giza in Egypt and was reportedly projected by NASA in 2019 to hit Earth in 2022 since its initial detection in 2009.

However, the European Space Agency (ESA) in February 2022 made a follow-up assessment of Asteroid 2009 JF1, reporting that it no longer poses a serious threat to Earth since its asteroid impact change has decreased from 0. In terms of probability, the said space object at that time is still possible to hit Earth but it is highly unlikely. Several weeks prior to the supposed asteroid strike on May 6, various media reporting has shown that a number of people went panicking over the idea that an asteroid will be hitting Earth. After all, NASA stated that the space rocks' probability of a major collision with Earth is small. Nevertheless, NASA is currently engaged in the asteroid-deflecting program called the Double Asteroid Redirection Test (DART), in case a planet-killing asteroid or a significant space rock threatens Earth in the future. Related Article: Asteroid Hits Off the Coast of Iceland, Becoming the Fifth Known Earth Impactor

Earth is preparing to meet in a few days an asteroid bigger than the famous “Empire State” building in New York City (with 102 floors). RevealingThe meteorite, officially known as 388,945 (2008 TZ3), is expected to come very close to Earth on Sunday, May 15. His last visit was in May 2020 to the 2008 TZ3. It is noteworthy that this asteroid orbits the Earth once every two years because

For out-of-this-world news, sign up for the Spaced Out newsletterA huge asteroid bigger than the Empire State Building is zooming towards Earth at a whopping 18,000 miles an hour, NASA has warned. The agency is keeping a close watch on the space rock set to pass our planet on Sunday, May 15. Any large asteroid set to come within 4.65 million miles of Earth is classified as “potentially hazardous” by

The size of the asteroid 2008 TZ3 is expected to be around 490m wide, which is 50m more than New York's Empire State Building's height. When an asteroid approaches within 4.65 million miles and is larger than a specific size, space officials consider it "possibly hazardous," New York Post reported. NASA stated that the asteroid will make its closest approach to Earth at around 5:18 PM EST and 9:18 PM

A massive asteroid will make its closest approach to the Earth very soon, says NASA; know the risk it poses. According to NASA, an asteroid which is larger than the Empire State Building in New York City will come dangerously close to our planet. This 1,600-feet wide asteroid poses a threat unlike most asteroids this year due to its massive size and close proximity to Earth. In fact, due to

An asteroid larger than the Empire State Building is heading towards the Earth and will pass our planet this weekend. NASA has designated the rock, called 388945 (2008 TZ3), a Potentially Hazardous Asteroid because of its relative proximity to Earth. The asteroid will pass by on Sunday, May 15 as part of its orbit of the sun, It passes close to the Earth every 732 days and two years ago 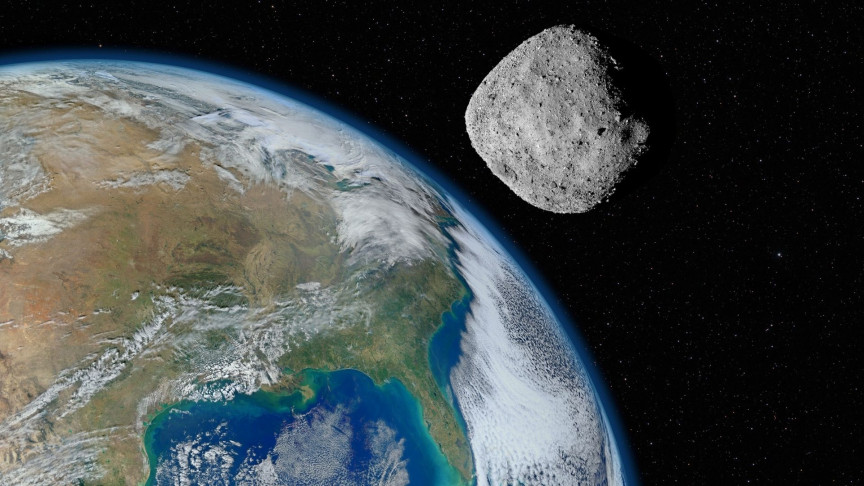 A giant asteroid, approximately four times larger than the Empire State Building, will zip past the Earth at a min-boggling speed of 47,200 mph (~76,000 kph) as we look forward to the weekend on Friday, May 27, Live Science reported. A NEO is any object that comes within a distance of 30 million miles (48 million km) of the Earth's orbit. Since the Earth has its own orbit to follow,

An enormous asteroid four times the size of the Empire State Building will make a close approach to Earth on May 27, according to NASA's Center for Near Earth Object Studies (CNEOS). Fear not: the asteroid , named 7335 (1989 JA), will soundly miss our planet by about 2.5 million miles (4 million kilometers) — or nearly 10 times the average distance between Earth and the moon. (opens in new

Get the latest top news stories sent straight to your inbox with our daily newsletterA hefty asteroid bigger than the Empire State Building is whizzing by the Earth this weekend. It is classified by NASA as a 'Potentially Hazardous Asteroid' because of its relative proximity to Earth despite being quite a distance away. Two years ago, it hurtled by within 2.75 million kilometres of our planet, but this time it

Was the Empire State Building ever the tallest building in the world?

When was construction finished on the Empire State building?

What type of structure is the Empire State Building?

Why is Empire State Building Important?

Is the Empire State building the most famous building in the world?